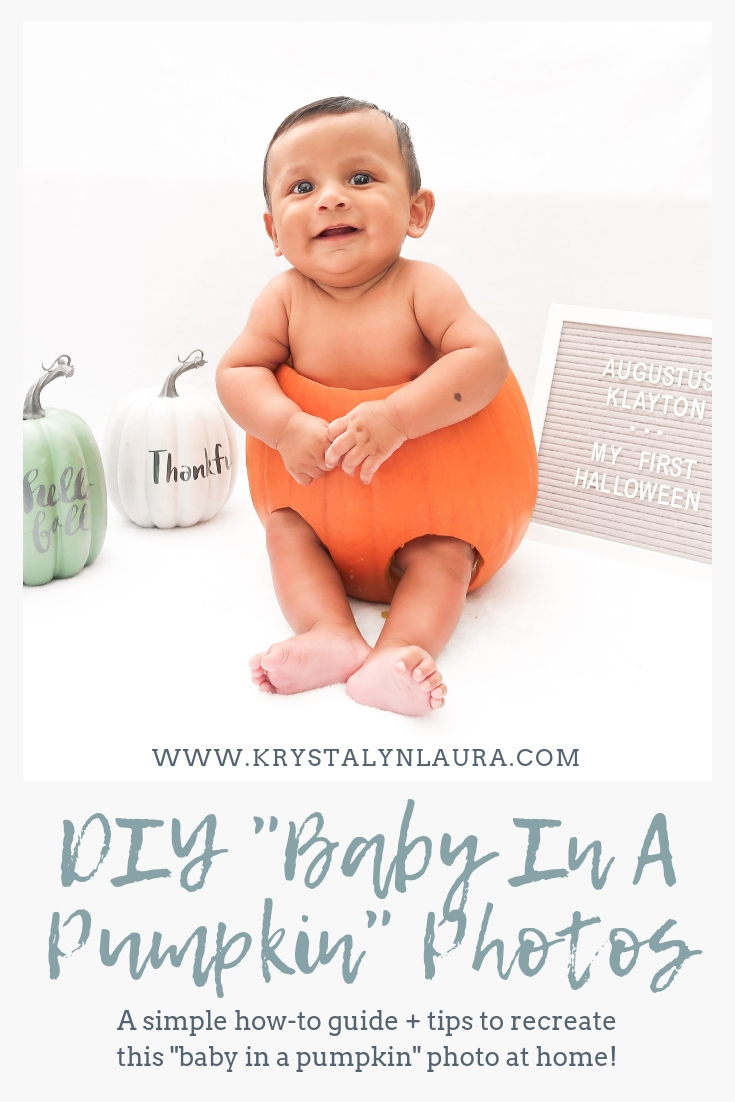 Amongst the year-of-firsts comes Halloween pictures! Naturally, I browsed through Pinterest for cute Halloween-themed ideas and thought this would be a great idea. Keep in mind that this is a hit or miss because every baby is different! It took us two tries; the first time, the pumpkin was too cold and Auggie just wanted to nurse and nap. We waited a couple of hours afterwards to try again, and it was a hit.

This is our first time doing this and totally winged it, but I’m proud of our end results. We got our pumpkin from Costco, but you can honestly get one anywhere. We tried to pick one that would be tall enough that reaches Auggie’s chest so he could rest his arms over it.

Tip: Pick a pumpkin bigger than your baby because you can always cut away parts of the pumpkin, but you can’t force your baby to fit in a small pumpkin. 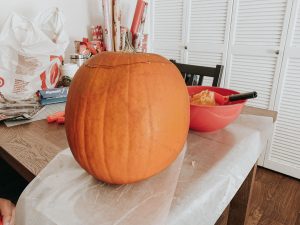 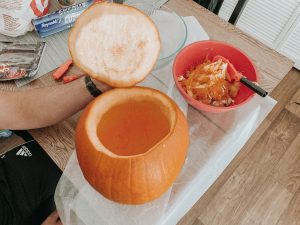 Tip: We laid out parchment paper underneath for an easy cleanup, but that’s optional. We originally sat Auggie next to the pumpkin to have a better estimate of where to draw a line and cut out the top. Then, scoop out the insides (Tip: save it to make yummy pumpkin foods).

This next part was tricky and took us three tries until we got it right. When we sat Auggie next to the pumpkin, we just eyeballed it on the pumpkin where his legs would stick out. We used a sharpie to outline the cutouts and a carving kit to make the holes. 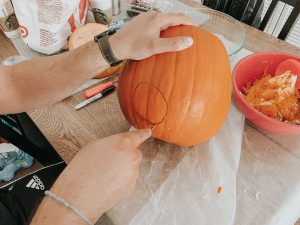 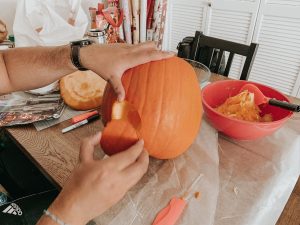 After a few trial and errors, we ended up cutting the back end of our pumpkin because we realized our pumpkin was small. Tip: Cutting out the back leaves extra wiggle room to fit your baby into the pumpkin, but make sure to be nearby so your baby can’t fall leaning back.

Optional: Because our pumpkin was too cold for Auggie’s liking, and it was a new texture for him, we layered the inside with saran wrap. We also placed an orange wash cloth in the front so his chest could lean against something soft (you can use any soft fabric). 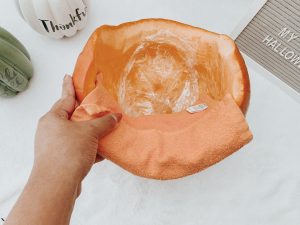 This was our set up. We kept it simple by laying out a white blanket from our bed to the floor, then added a letterboard that reads “August Klayton – – – My First Halloween” and two plastic pumpkins we got at Target. I wanted to add some string lights, but couldn’t find it in time when we were taking the photos. Little pumpkins would be cute too. 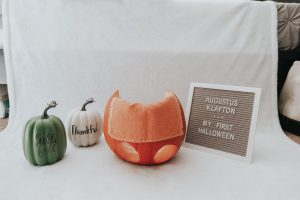 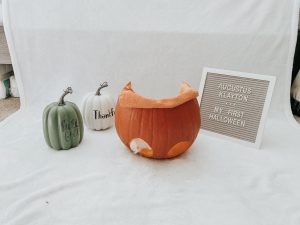 I also saw other families online do the photos on their front porches or back yards. You could add a variety of other pumpkins (in both sizes and colors), leaves, plants, and so forth.

Because we cut out the back, Jesse was there to the side to catch Auggie just in case he leaned too far back. Here are some outtakes. Auggie laughed so much that he began to lean haha. 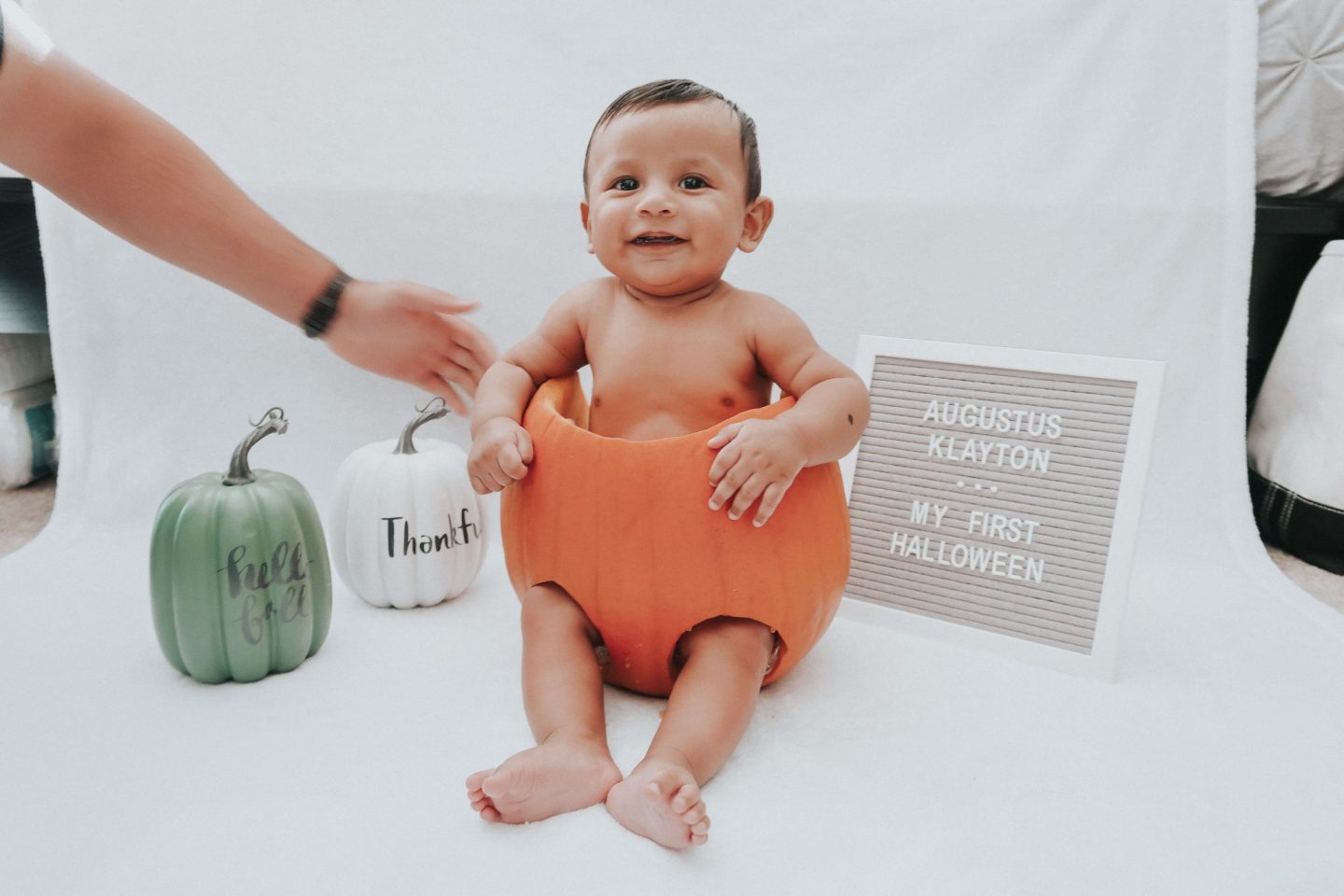 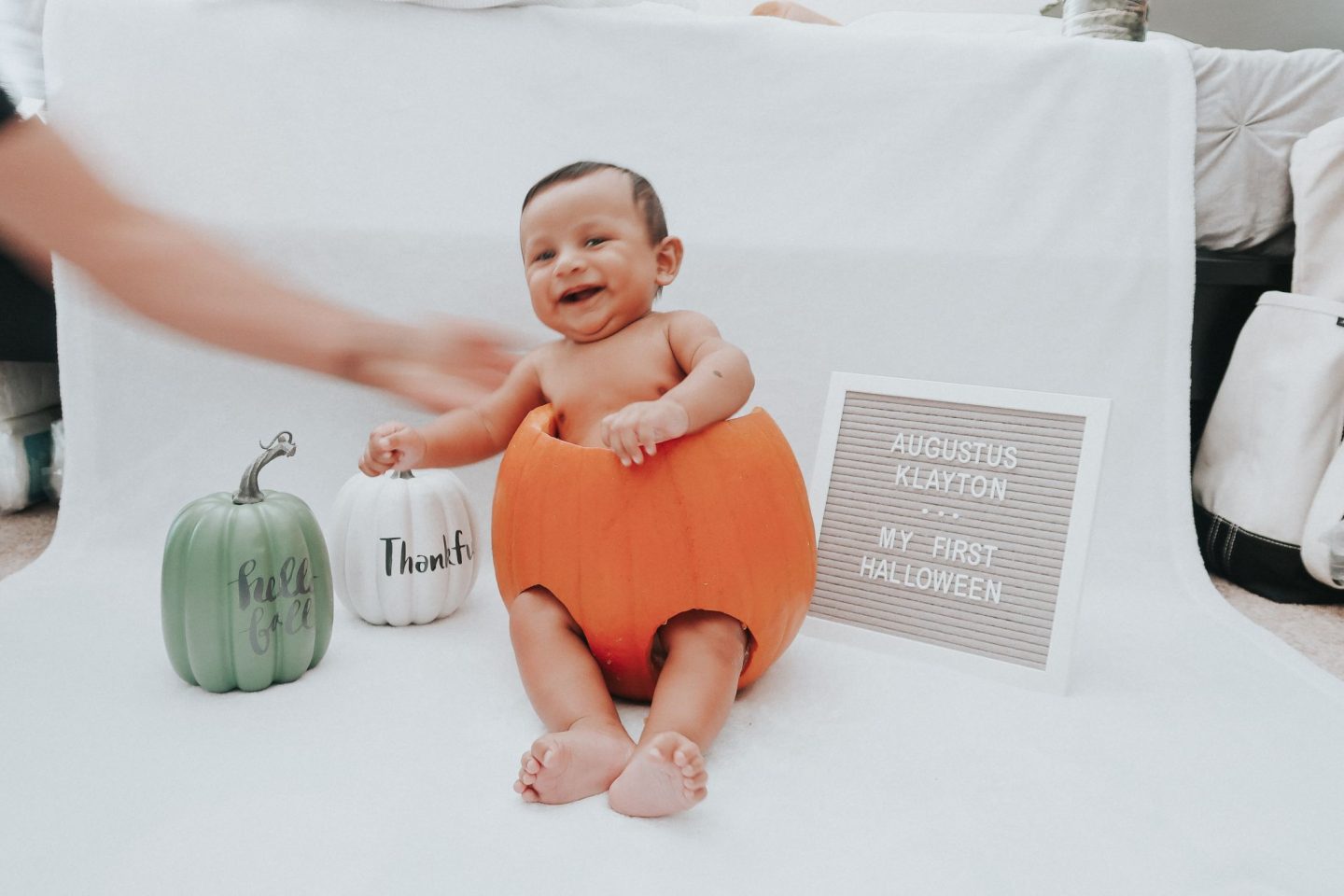 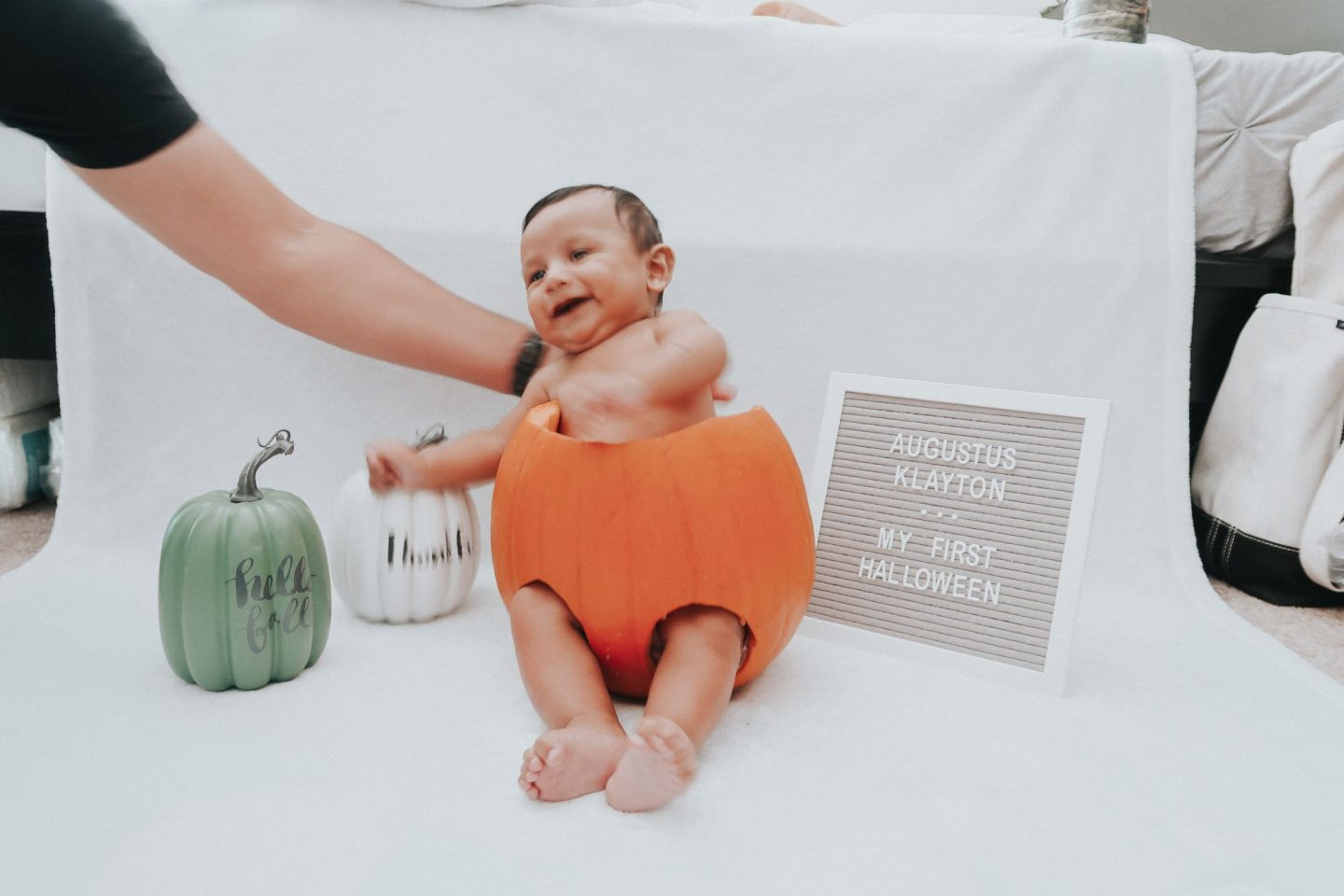 Let me know if you guys tried to take photos like these, and if it was a hit or miss! Here are a few other shots of Auggie in the pumpkin. Happy Halloween! 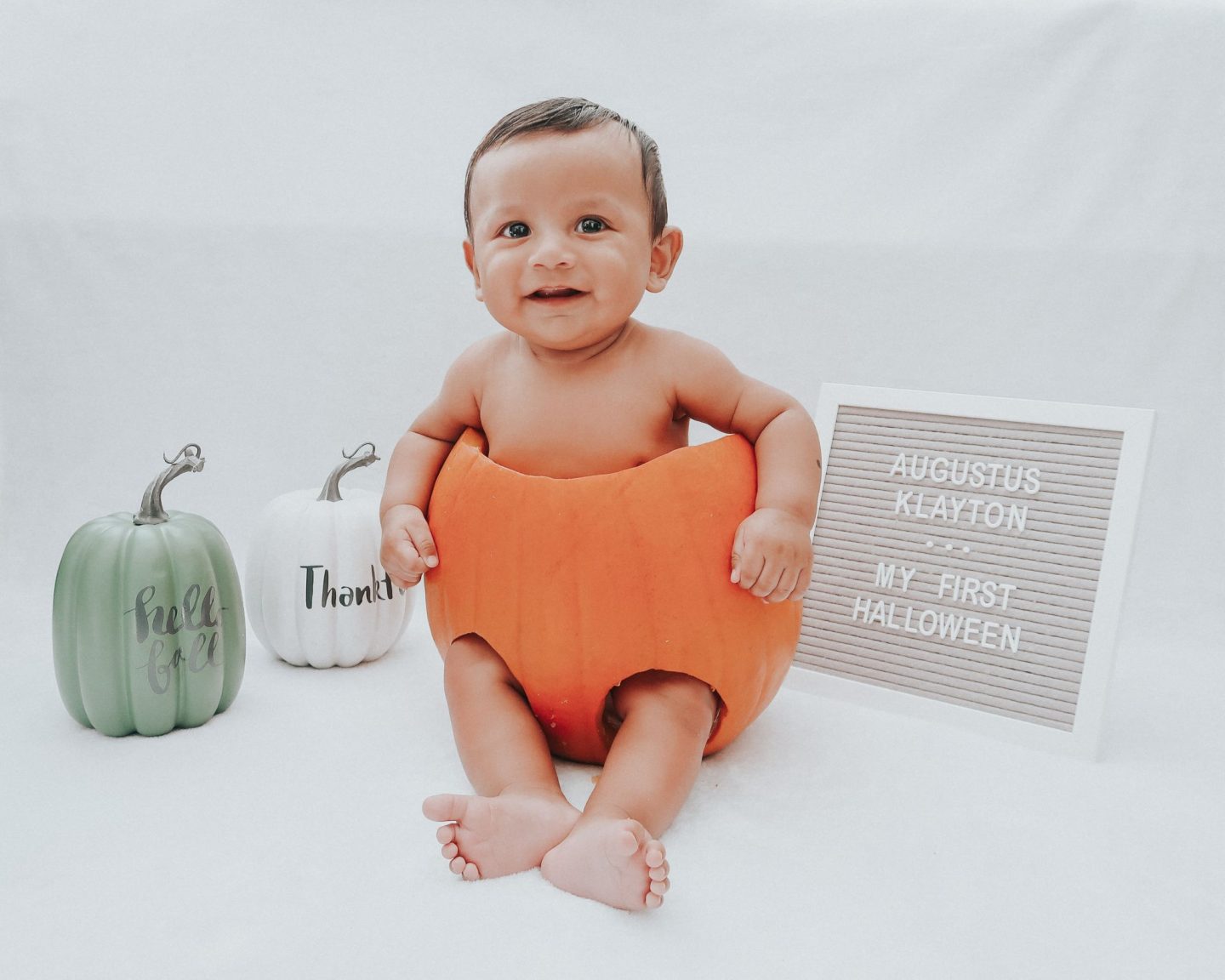 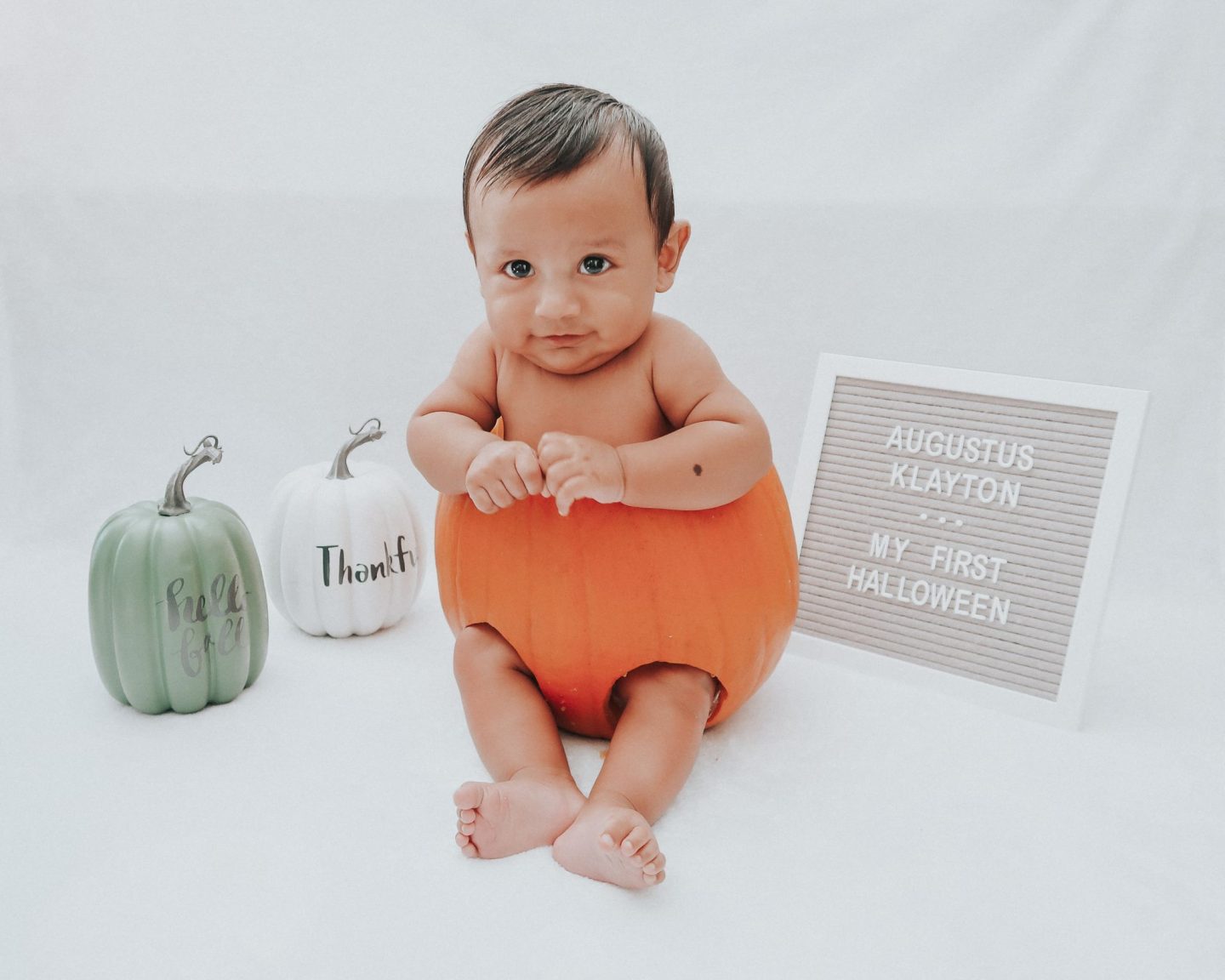 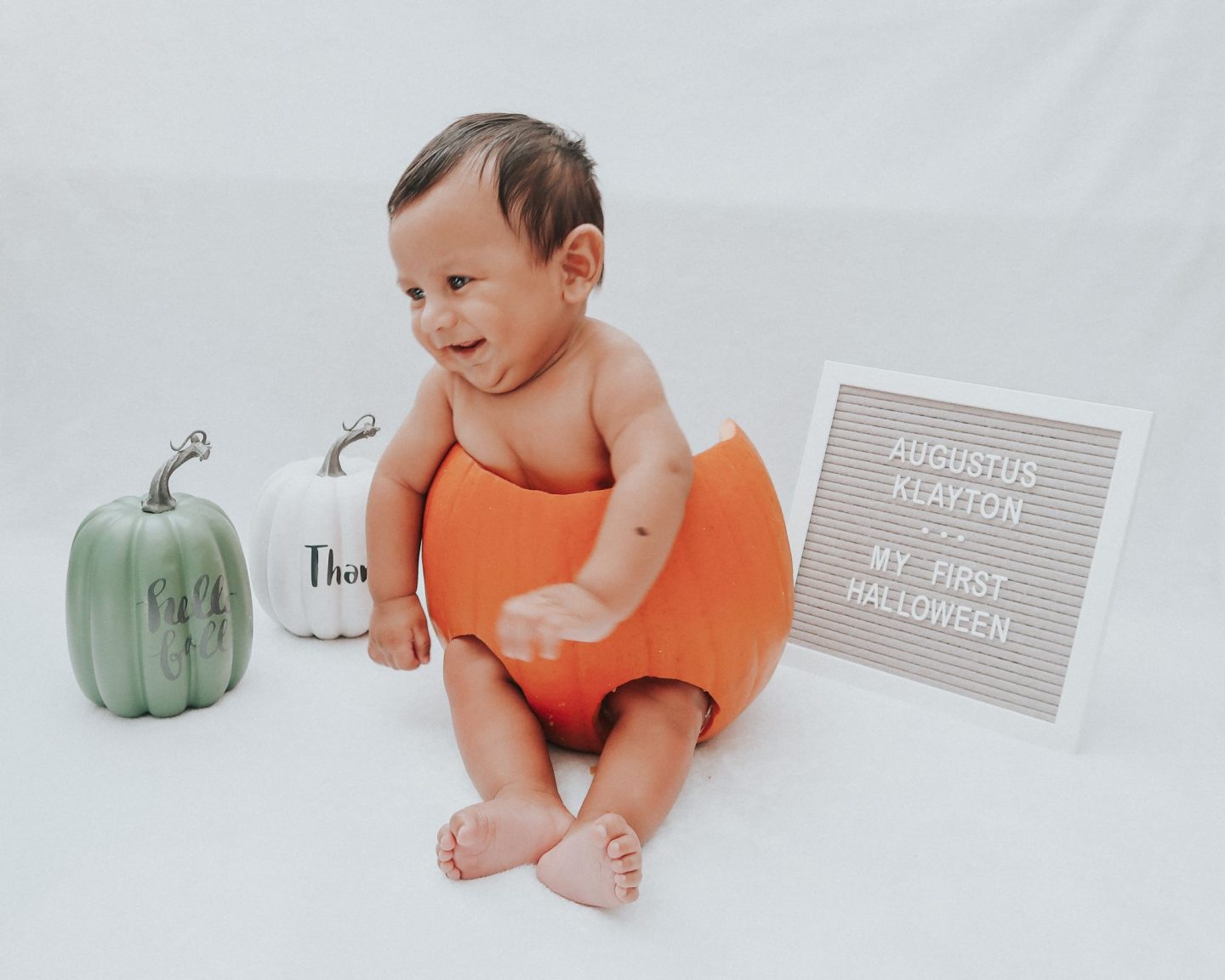 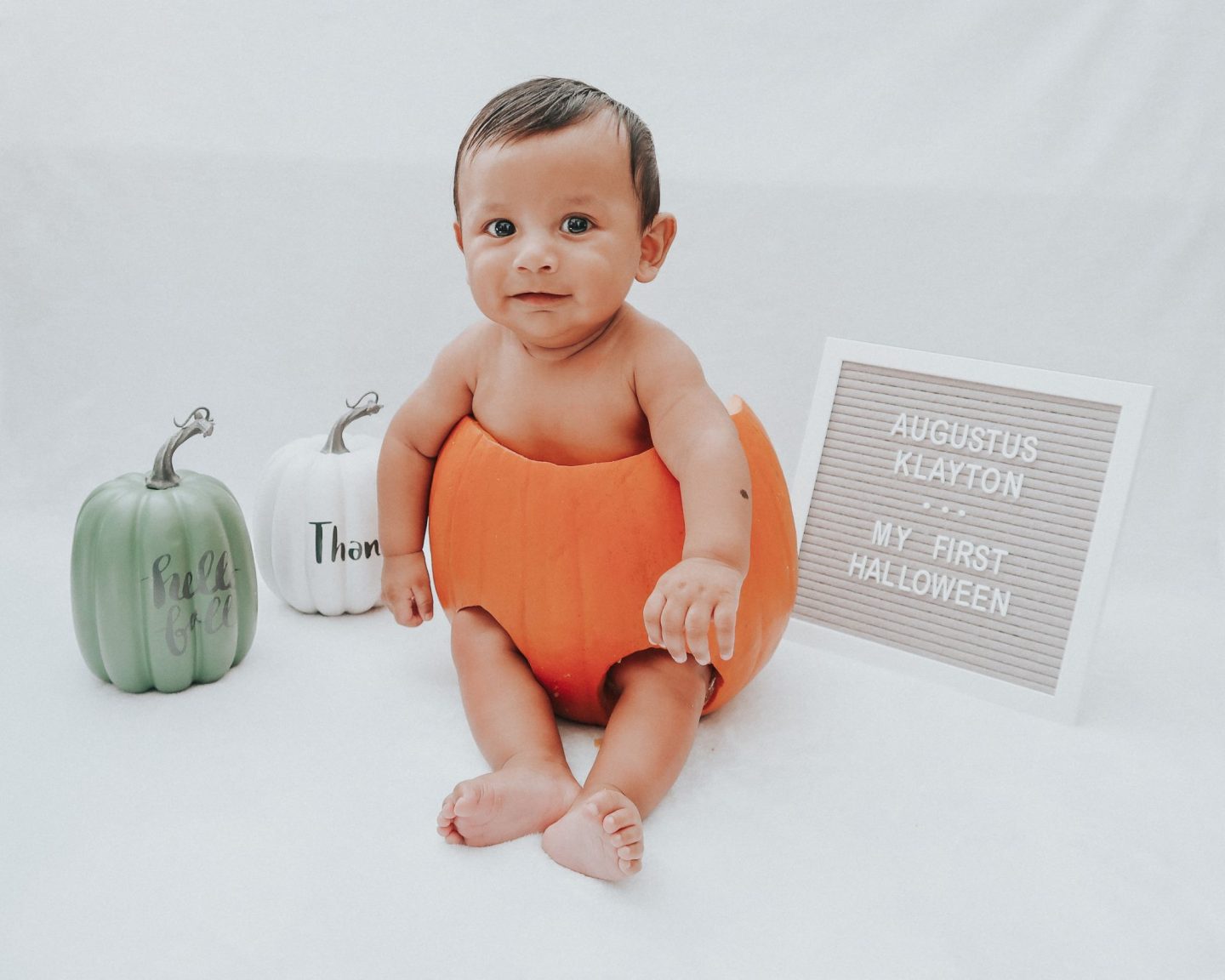